These LONG awaited babies have FINALLY arrived! We were surprised and shocked with the timing and the chaos that ensued, but at the end of everything we have been blessed with 2 wonderful babies :) Many people have asked for the details so here they are:

I woke up Jan 26th (Thurs morning) with my water breaking, and me in COMPLETE shock We had recently been to the Dr and he said we should be able to make it another week or so.... I swore, woke Adam up, we grabbed our overnight bags (which I had JUST finished packing that day :), and HAULED to 'Vegas. By the time we finished the hour and a half drive, my contractions were 3-4 min appart and the nurse was able to see that I had dialated to a 5. The nurses had been moving around kind of slow before that (I'm sure they get a lot of false alarms), but when they realized I had already gotten that far, they started to run around like crazy. It then took a little while to get the Anastesiologist up there for the Epidural, but then he seemed to have a hard time getting it in.... it took him 20 min to put it in, which was FOUR contractions people! (they kept telling me it was my first labor, so I shouldn't deliver for several hours. Because they're twins that should prolong things as well) An hour later the nurse asked me if I was having any pressure... I told her I had a wierd level of pain tolerance (I can endure a lot), so she checked me and I was dialated to a nine.... They also figured out that the epidural hadn't worked (up to that point I thought I was being a wuse, because everybody raves about how much they love their epidurals)
The doctor showed up about an hour later (I was in more pain now, because I wanted to start pushing, but the dr hadn't shown up until then) and I pushed for 20 min and Zach was born (PS the Dr was MAD they hadn't called him earlier. Quote 'I sad to get her comfortable! I DIDN'T say to get her dilated to a 10 and THEN get her comfortable!' :) The dr had to then give me some shots 'down south' (because no working epidural), so they could give me an episiotomy. He was beautiful! SO surreal to see something come from your own body. Adam was able to cut the cord and it was all pretty dang awesome. But then the dr saw that the blood coming out with Zach looked 'old'.... apparently he had torn his placenta the day before which is what triggered my water breaking. The doc got a little nervous and started yelling for me to keep pushing to get Ellie's water bag to drop. They broke that and he noticed there was a TON of blood in it. He said, 'We're done' and they started the emergency C section. Adam and I didn't know entirely what was going on as they had him leave the room. They then had to put me out (again because no working epidural) and they pulled Ellie out..... They found she had a torn umbilical cord and wasn't breathing because of it... Praise ALL heaven they were able to revive her. And she has done GREAT since then. While talking to the Dr later, he told us if anything had delayed them even a min more, we would've lost her.... I can't even IMAGINE loosing our little girl and I thank our Heavenly Father every day that they are both with us and are both healthy :) (Yes, EVEN when they're both crying at 2am :)
So, I woke up a couple hours later with stiches 'down south' and stiches in my stomach, but 2 healthy babies. Adam and I were able to compare stories and realize how INCREDIBLY blessed we were to have both those little babies with us. 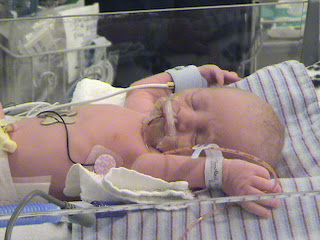 Zach FINALLY being able to stretch all the way out. He tried SO hard while in the womb :) 4lbs 9 oz 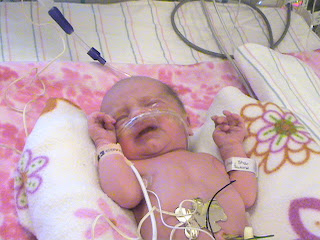 Ellie HATED not being swaddled, so she is voicing her discontent right here :) 4 lbs even.


The next stage was getting them through the NICU.... NOT my favorite time in my life. It was SO hard to wait, watch them, and to want to take them home SO badly. We understood that they needed more time to grow, but it was SO emotionally draining to see them hooked up to so many monitors and IV's, and knowing we couldn't do anything to help.... One of the worse moments was when Ellie's IV started to fall out and they tried to save it. She screamed so long that she was horse and I was in the corner sobbing because I could do NOTHING for her pain. Adam even had to go back to work for 5 days in there and I had JUST been discharged from the hospital..... I should've been 'taking it easy' because of the C-section, but I wanted to see my babies so I was at the hospital for about 9 hours a day and had quite a distance to find any thing to eat. Needless to say, I had high blood pressure and my Dr was threatening to put me on meds :) LUCKILY, Adam came back again and he saved me :) I. LOVE. THAT. MAN. He has been such a rock through all the chaos and I couldn't do it without him.... He's SUCH an amazing husband and I've LOVED seeing him as an amazing dad. I've loved this new and crazy phase in our lives. 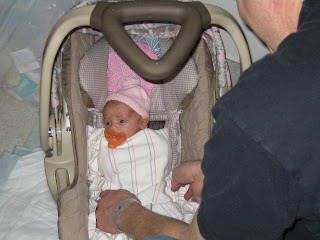 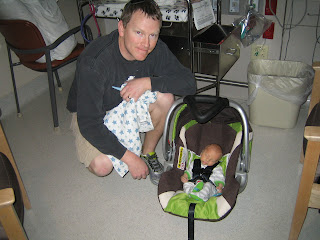