So I have been trying to post about this last weekend for awhile, but my turkey of a husband has been on the computer every night! ;) (For some reason, he has to do his homework;) (I'll probably get whacked for that comment!;)

But anyway, the state of Utah has a Fall Break about the middle of October every year (Nevada never had this one..... we did always get Halloween off though! Gotta love that Nevada was formed on October 31st!) I really wanted to do something during those couple of days, so we decided to hit up the good 'ole town of Salt Lake City. We recruited my sister Tasha and her little girl Mylah to come with us, called up one of my really good friends from my mission (Cally Ashton.... well her last name is now Johnson, but she will forever be known as Ashton!), and headed on down. We decided on IKEA and headed towards the wonderland of shopping. I'm not sure how many of you guys have been to this Mecca of all wonderfulness, but I ADORE this store! I had been to it before when I lived in Spain, but to have that here in the U.S. is a piece of heaven on earth! (There are a couple of stores, for those that know about the area.... Barrio 2,5,Alcobendas, etc) I seriously could just wander for hours (which we have done before ;) and not worry about anything but the hundreds of displays in front of me. Ahh.... heaven..... We even made it out of there with spending only $10! Yeah for staying on a budget! (Well, Cally had even more fun than us and bought a new bedroom set ;)

So after this adventure, we had a great lunch while Cally headed to her doctor's appointment (Congrats on having another little one on the way!). Another round of shopping and we were headed home to a dinner with Tasha, Justin and friends. The next morning we were even able to sleep in! (I NEVER get to sleep in! It has been ages!) THAT was definatly a highlight of our long weekend!

This past week has been crazy, but one of the fun events was a 3rd grade program we had on Wednesday. It was a musical program about the history of Cache Valley. So cute! The students did a great job and we all had a fun time with the program (OF COURSE I forgot my camera and didn't get any pictures.) Adam surprised me by showing up to watch the whole crazy production! (He was suppose to have classes until after the program, so I was really surprised to see him.) I am so grateful for his help in so many areas...... I sometimes feel so overwhelmed, but my wonderful husband supports me so much. I just stinking love that kid!
Posted by Adam and Shari Crawford at 7:33 AM 4 comments: 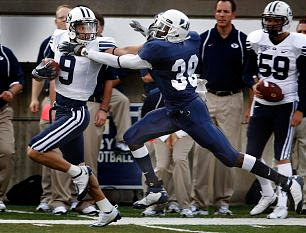 This weekend included a rousing BYU and USU game with my parents and sister making the long jaunt up from their homes. It was really great to hang out with all of them! We had a lot of fun enjoying the game and conference all in one weekend. It was wonderful to see the fam and doubling the fun were the great talks we were able to hear from our church leaders. 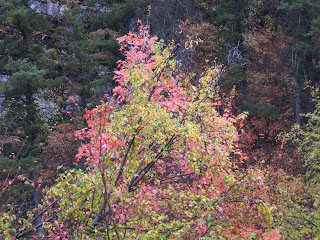 In our down time, we were able to escape up the canyon and enjoy the colors of the season. I love this time of year! It always makes me so excited and I feel like a little kid again! I think I have really started to enjoy every season again, because of my job. Being around kids all day that can't stop talking about their excitement is hard to ignore! It just seeps into everything (their stories they write, their spelling sentences, etc) I have also loved the intense colors that come with this season. Growing up in southern Nevada, we didn't always get the deep reds and oranges that appear up here.
What a wonderful time of the year! ;) 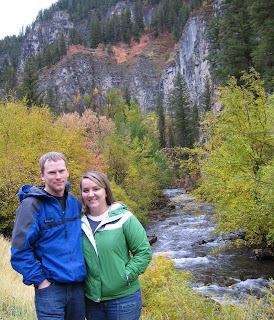 (What's so random is that I absolutely adore the Fall Plain M&M's. I know there is absolutely no difference between these M&M's and normal plain M&M's, but there is no reasoning with a girl that loves chocolate!!)
Posted by Adam and Shari Crawford at 5:28 PM 1 comment: