I happened to mention to a good friend that the snow in January was, "killing my soul" and she agreed that she was feeling the same discomfort :) She is an 'on the ball' type of lady, and before we knew it, she had found a SERIOUSLY good deal to Cancun. The deal included airfare, hotel, and rental car. WHAT?! Needless to say, we were excited to leave the 10 feet of snow that was here in Logan :) Here are a few pics of our wonderful get-a-way :) 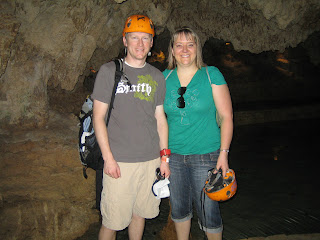 Us at 'Explore'. A really cool theme park that had zip lines, underground rivers, and off road vehicles 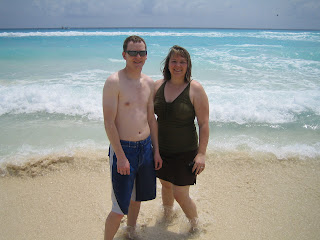 Can you believe the blueness of that water?! I might be a little homesick for that beach..... 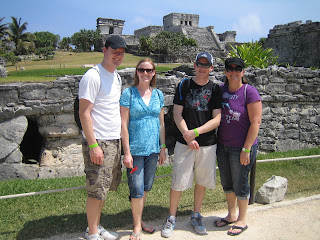 The gang at Tulum, Mexico. These were honest-to-goodness temple ruins built about 100 AD 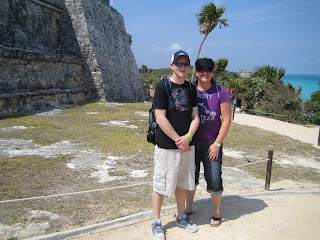 This is the back part of the temple and you can see how close the amazing Caribbean Sea is to the temple. Can you imagine this as the view from your temple?! SO peaceful... 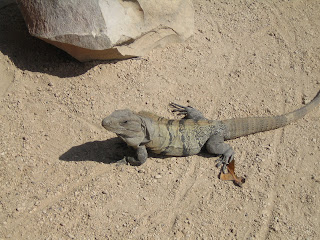 This lizard almost killed me! He was headed for my lunch and didn't care that a human was right there holding it. I don't think the pic shows this, but he was HUGE! I swear I'm not a pansy :) 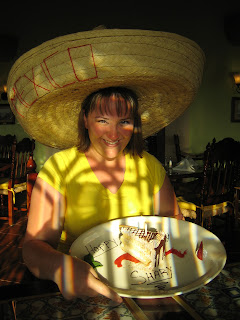 I MIGHT have had a birthday while we were there, and it MIGHT have been a big one (beginning with a 3....). But I'm not admitting that age until Adam joins me in July :) 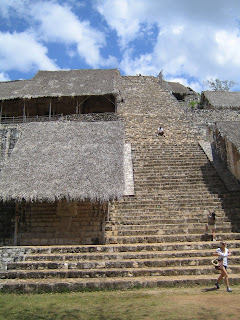 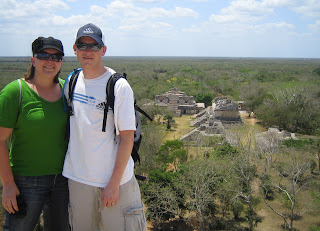 Us at the tippy-top of those ginormous stairs in Ek Balam, Mexico 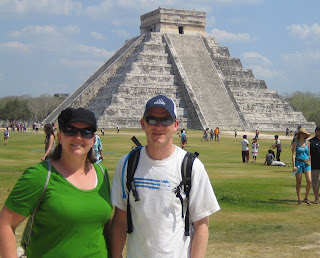 We're now at Chichen Itza, Mexico. AMAZING Mayan temple with thousands of astrological connections with the layout of the temple grounds and how the buildings are built. I can't remember all the details, but EVERYTHING had a meaning with the seasons and their religious beliefs. 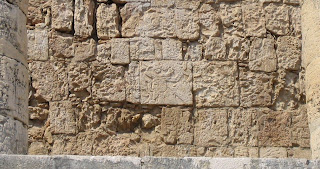 Can you see the carving in this temple called 'the white god'? Yup, that's a white man with a beard.... Interesting, huh? Built about 200AD 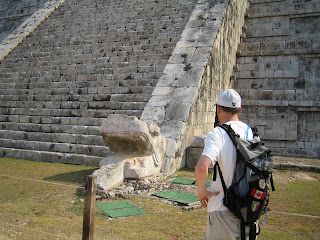 This serpent was built as a railing up to the top of the temple (Which we can't go up anymore. Apparently someone fell a couple years ago, and that was the end of touring the temple). There is a period of about 2 weeks where the sun goes across the temple and gives the serpent scales. This JUST happens to end on April 6th. 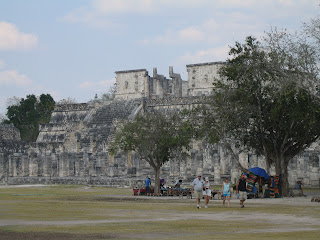 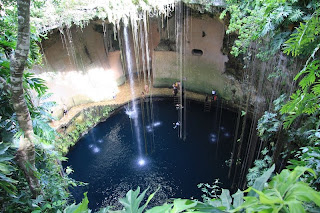 Then we finished this INCREDIBLY hot/humid day with a refreshing swim in this gorgeous Cenote. They are sink holes found around the Yucatan Peninsula that are filled with fresh water. They use to be for drinking water, but now everybody gets to enjoy them as a swimming hole :) 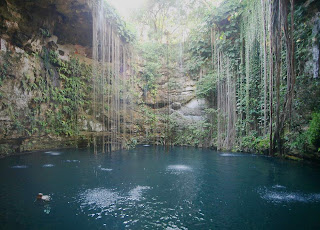 I know I'm SUCH a geek, but I really enjoy touring old buildings and cultures. There is something to be found in looking through their records and beliefs. It fascinates me to feel like I'm connecting with people that lived thousands of years ago.... I often wonder if they knew their temples/alters/carvings would last until at least 2011? Or if they knew how much we would still have in common 2,000 years later (still trying to raise/teach children values, or do the right things in life) or how very different our lives would now be (with technology and advancement). I felt the same way in Italy and Spain as I did in Mexico and I can NOT wait until we go on another journey :)
Posted by Adam and Shari Crawford at 11:16 AM 6 comments:

Yup. I have really lost the thread of blogging.... It's so lame to say 'we're busy', but the truth can sometimes be boring :) The biggest news was that we heard back from the Miracle Fund people... WE WERE APPROVED!!!! (we then promptly left on our trip to Cancun, which is why this news wasn't reported sooner :) It happened like this...

I came home from work a little while ago and was on the phone with my sister. I dropped my stuff down and noticed a letter on the table from the University of Utah. I did a double-take and realized the letter was very inconspicuous and only one page (having applied to a couple of colleges/programs in my lifetime, I thought 'Oh, crap'. EVERYONE knows a thin letter is NOT a good sign...) I glanced over it, while my sister dealt with her 18 month old son chewing her out for letting a balloon float out of the car (ps. I LOVE my niece and nephews! :). Nothing jumped out at me, so I went back and started reading the whole letter. 10 very short sentences latter, and I was screaming and hollering to Adam. I ran over to him and yelled, "Is this for real?!" He started laughing and said, "I think so!" I hollered at Tasha to hold on a min and then went tearing through the house laughing, crying, and generally making a fool of myself :) I couldn't stop repeating over and over, "I can't believe they got back to us so quickly!.... I can't believe they approved us!" I'm pretty sure my sister thought I had lost my dang mind :) Eventually I explained to her what all the chaos was about and then SHE started laughing and being just as crazy :)
One of my all-time favorite memories....
So, pending a visit from a Social Worker (they treat it like an adoption), we will start all the meds soon and do the whole procedure in June.... Thank you all for the millions of prayers you have already sent up. Thank you for your support and love! We would appreciate one more favor... if a couple more shout-outs for everything to go well in June could be sent to our Heavenly Father, that would be swell :) Truly we are blessed...
(Cancun pics to come soon :)
Posted by Adam and Shari Crawford at 7:17 PM 11 comments: